It’s a big job but not overly complex — just take your time and don’t rush. If you can assemble a desk from Ikea, you can probably build this. It’s just like building 20 desks and then attaching them all together. Not impossible but it does take a lot of time. 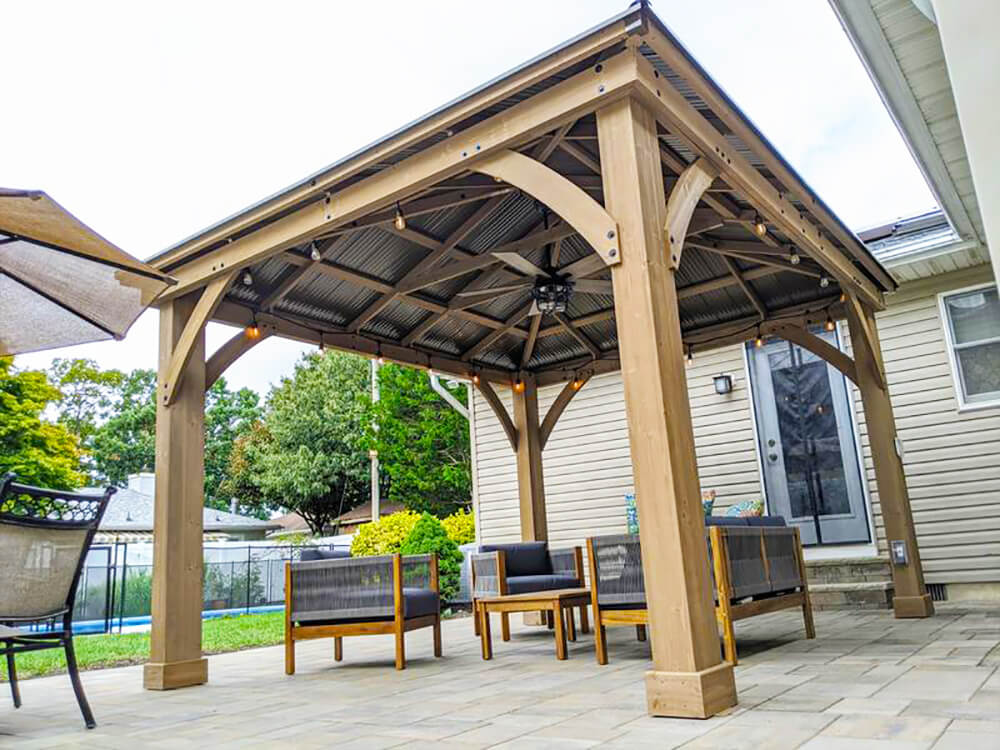 I am only moderately “handy” and built it myself over three days with some minor help (fetching parts, holding beams straight while tightening screws, etc.) We did enlist the help of several neighbours (had six of us in all, three ladders, and a 9-foot 2×4) on the last day to help put the roof on. 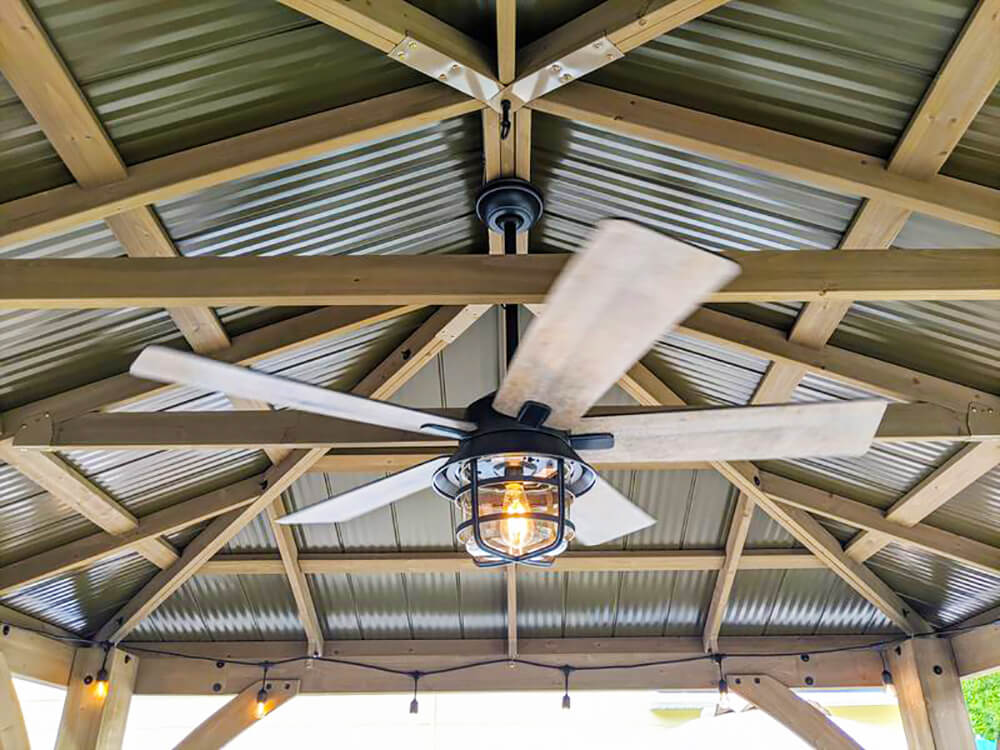 In the end we are thrilled with this gazebo and everyone who has seen it has been impressed with the results. Even a contractor friend said he’d have a hard time building one for the same cost just buying the parts!

SOME TIPS FROM MY EXPERIENCE:

+ Breaking it up into smaller jobs helped make the project more manageable. Day 1, I separated the hardware into labelled bags, built the posts and assembled the short and long beams (4 hours, steps 1-4.) Day 2, I assembled about 80% of the four roof panels (7 hours, steps 7-15.) Day 3, I completed the roof panels and then we stood up the posts, assembled the frame, and installed the roof (9 hours in all.)

+ If you’re still nervous and want to hire professionals, consider building the beams, posts and roof frames yourself. That will leave the heavy lifting to the hired crew but you can save yourself some big bucks by handling the time-consuming steps yourself. You’ll also know if you are missing any parts before you pay someone to come on site.

+ I found the instructions to be excellent but you do have to read every step carefully. There are a few items that are noted as IMPORTANT and they mean it! It’s not like Ikea furniture where they recommend wearing goggles to turn a screw. If Yardistry recommends something in the instructions take it to heart.
Look through the instructions online in advance to fully understand the measurements and the scope of the project. Watch some videos on YouTube of the assembly process.

+ Many of the bad reviews seem to complain about missing/damaged/warped pieces or issues with the delivery. Thankfully I didn’t have any of those issues, but perhaps that was just luck of the draw. I did have a few beams that weren’t perfectly straight, but when tying them together with bolts to make one long piece everything straightened up. Same with a few of the roof supports–I checked the angles with a T-square and pushed them into position before fastening the screw.

+ Check the interior of the posts for more parts, and use a flashlight to be sure!
If you have any questions about what to do, STOP and look it up. There are tons of helpful videos online from DIYers and the manufacturer. I couldn’t understand how to install the weatherstripping to the roof rails based on the pictures, but watching the video online cleared it up instantly.

+ Separate hardware in advance: Move all bolts and screws to large ziploc bags and label them clearly. You don’t want to be pulling screws out from the small bags as you’re trying to build and risk losing any because there are VERY few extras. The instructions claim 236 pcs of the hex roofing screws–I ended up with a single screw left over. Get some magnetic bowls to hold the screws and keep from spilling or losing any.

+ I found the quality of the screws to be excellent. Of the 1000 or so screws and bolts included, I only found a single one with a defect (the square hole was slightly filled with paint, but I still managed to drive it), and only broke one other (because it drilled into a screw coming from another piece and when I tried to force it, the screw head sheared off.)

+ Have an open, flat area for building. I built mine in the front yard and driveway and then moved the pieces to the back yard for final assembly. I could carry every assembled piece myself except for the large roof panels (still not THAT heavy, but best to have a helper to avoid damaging them.)

+ If it’s hot out, have shade to work in! The last few steps once the roof is on are under cover but for everything else you’re out in the open. It helps to avoid frustration and take your time if you can literally remain cool!
Keep the roof panels and other metal parts in the box and out of the heat until you’re ready to use them.

+ The posts are hollow with about a 4×6” open center. Plenty of room for running wiring to the top, and the beams have lots of room to install lighting and run cables under cover. We were having a new patio installed, so had an electrician run a conduit from our crawlspace, through the foundation, and right to the spot where one of the columns would go (took a lot of careful measuring to be sure of the right place!) Now we have lighting, outlets, and a ceiling fan in our gazebo and it looks amazing–super clean with no unsightly wires leading to the house. (I also ran speaker and network cables in case I ever need them in the future.)

*Disclaimer, modifying the original design may void the warranty. 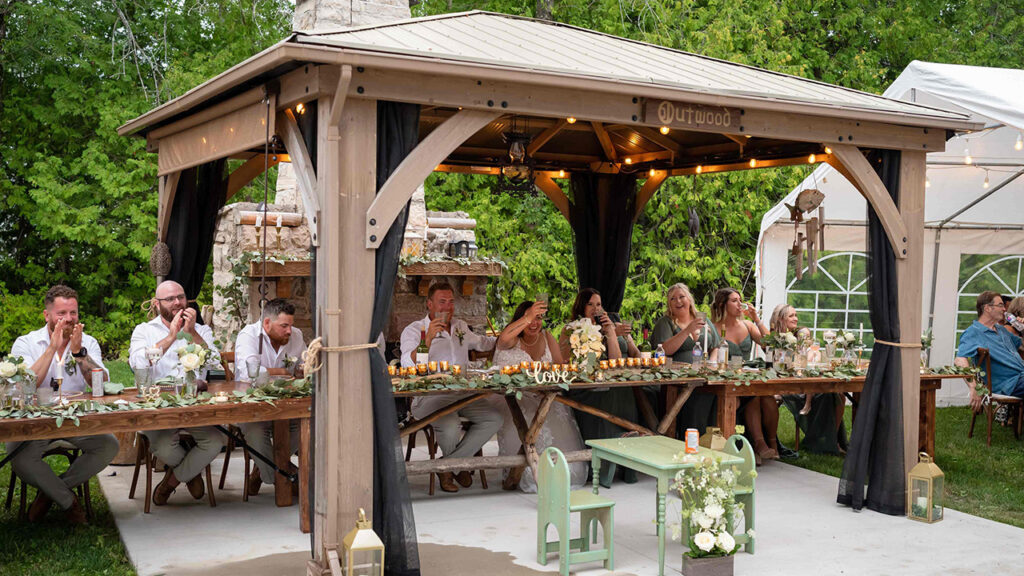 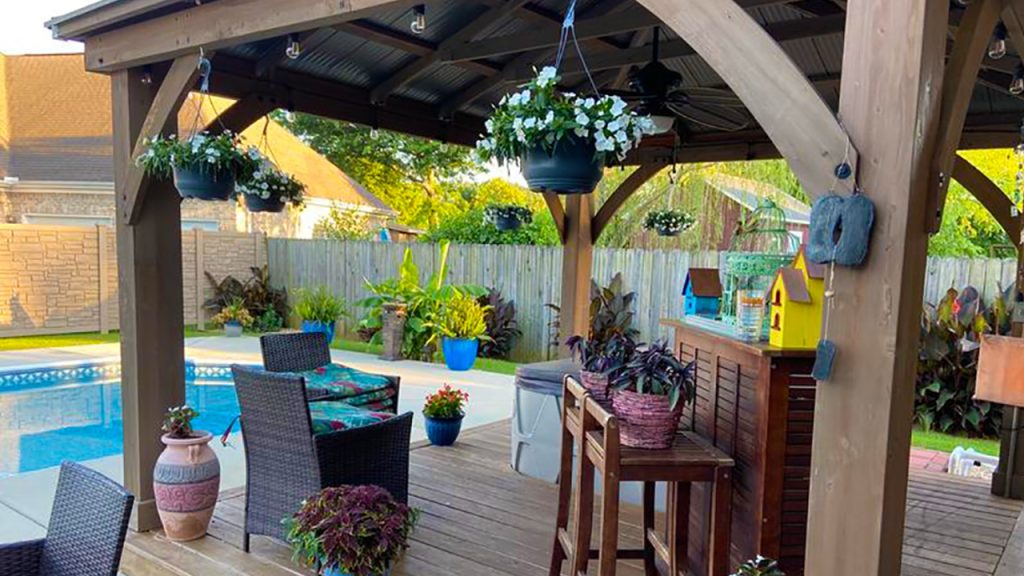 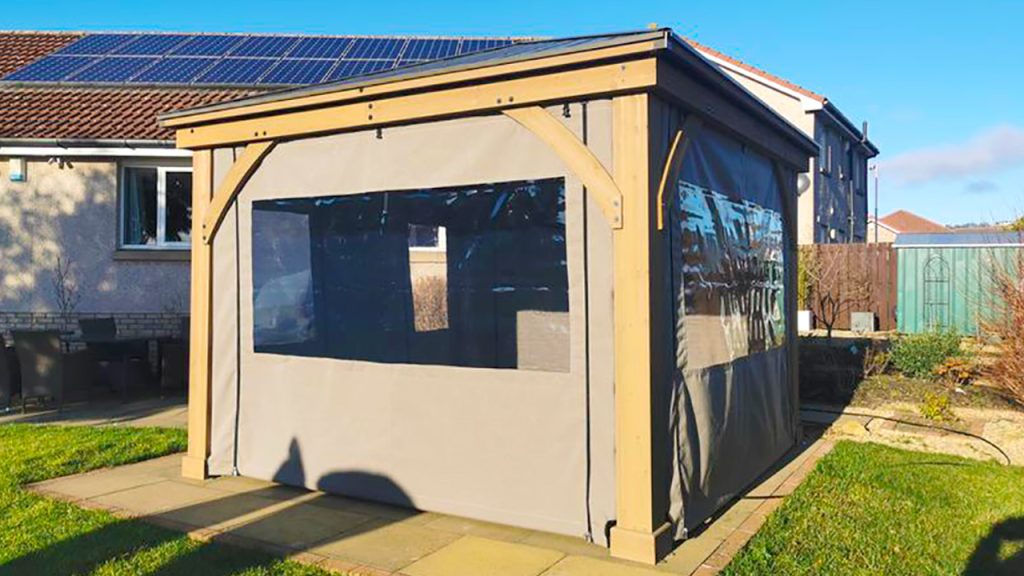